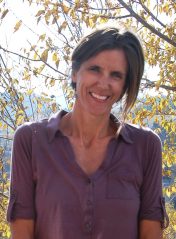 When Julie Smith arrived in China in her early 20s, she didn’t know what to expect. But while teaching English in Chengdu, she lived across the street from The Sichuan Institute of Traditional Medicine. There, she took a few classes, her teachers and fellow students convinced her to study acupuncture, and, she said, she just fell into it.

“I would go to these clinics, and the doctors would hand me these long needles, and say, put these in that woman’s face,” Smith said. “It was really intimidating, but I did it.  I learned on the job – so to speak.” Plus, she began noticing the impact acupuncture had on a wide variety of illnesses and the throngs of patients that passed through the crowded clinics. People who had facial paralysis, the flu, back pain, psoriasis or broken arms, among other things, found relief. For example, she recalled, “It was inspiring to see family members bring  their Nai Nai (grandmas) in for acupuncture every day if they had recently suffered from a stroke.  They often traveled great distances to receive treatment.” People who have a stroke need to regenerate the damaged tissues quickly, so the more treatment they get in a more concentrated period of time, the more likely they are going to regain their faculties. In most Chinese hospitals, whether they are western or traditional, acupuncture plays a major role in post-stroke rehabilitation.

For Smith, this was eye opening. “The Chinese are really dedicated acupuncture patients,” she stated. And the practice is not only for adults. Smith saw a lot of infants and children pass through the clinics.  There are techniques specifically adapted for children that are very effective and accepted by most children.  With shonishin  ( a type of Japanese acupuncture for children) tools are used on the surface of the skin rather than needles. “Children are very sensitive. The gentler you are, the better they respond. It’s a shame parents here don’t use acupuncture more often. You can really see a lot of improvement quickly with pediatric coughs, fevers, asthma, sleep issues, and digestive problems … to name a few.”

After her formal studies in Seattle, Wash., where she was one of the first students to study in a brand new acupuncture school started by Dan Bensky, she returned to China again.  This time she studied Dermatology at Dongzhimen Hosptial in Beijing.  “Treating skin disease continues to be one of my favorite things to treat.  It’s exciting because you can actually see the results of the treatment and Chinese Medicine has so much to offer people suffering from these horrible conditions”.  Smith has completed an extensive training program with world renowned Chinese Medicine Dermatologist, Mazin Al-Khafiaji.

Another big passion is moxibustion. Influenced by a close colleague who studied Japanese acupuncture, which included the use of specific moxibustion techniques, Smith made a big effort to master this art. “I came to realize that many people didn’t want  the bitter tasting herbal decoctions I had to offer,” she explained. “But I’ve always liked using herbs to heal the body; I’m more comfortable with herbs than I am with needles.”  Incorporating moxibustion into her practice gave her the opportunity to use herbs externally rather than internally.  Smith saw results; most of her patients felt significantly better when she used a combination of moxa and needling, especially for pain.  Working with these mediums opened Smith’s mind and heart, she said. “It felt like I could accomplish an enormous amount with just a little bit – some moxa and a few needles. Healing can be deceiving like that – often it doesn’t require a huge effort; it just takes intention and attention.”

In 2002 Smith opened the Moxa Shack in a converted office space in her garage in Lyons, allowing her to care for her young children. From 2010-2020 Smith practiced Community style acupuncture at the Little Yellow House in Lyons. Currently, she sees people privately at the same location in Lyons and at her office in the Steelyards in Boulder. She offers discounts via packages, a sliding scale and accepts insurance.
“How you treat your body and respect your health is really a reflection of your ethics and how you choose to be in the world. Health is a journey for people, and acupuncture/Chinese Medicine can be a powerful healing tool if you choose to receive it.”

Julie Smith has practiced for 22 years, taught for six years at Southwest Acupuncture College, and currently offers treatments in both Boulder and Lyons. She lives in Lyons with her husband, Tim, the Director of Asian Studies at CU, with whom she has been married for nearly three decades. They have two grown children.